EMS EVOLUTION 2018 featured a lightning round presentation by Jonathan Sell of Booker EMS on blood labs for EMS. TEMSA recently sat down with Jonathan Sell and Ben Oakley of Blanco County EMS, who also has a blood lab, to discuss their experience with the service.

The following is the conversation.

TEMSA: When did EMS agencies start utilizing their own blood labs? 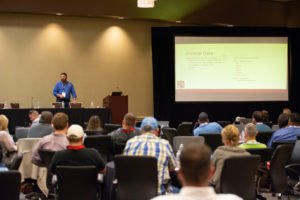 Jonathan Sell: Technically, every EMS that has a glucometer, which is also a lab, However, they are simply operating under a CLIA Certificate of Waiver (or they are breaking federal regulations if they don’t). As a result, most EMS agencies have a “lab,” so to speak. That said, what we are doing with a blood lab is taking that a few steps further. It’s important to define that what we are doing is point of care testing. We don’t have a lab back at the station that we take samples back to. Instead, the entire process is run though a simple portable device (ours is the Abbott iStat) on scene.

The iStat was developed for both civilian and military use back in the 1980s and 1990s. The company started in 1983, I believe, and the system was available and having studies published by 1994 and was bought by Abbott in 2003 for just under $400 million. It’s not particularly new technology, but the price point and the technical ability have now gotten to the point that we are seeing them a lot in health care settings.

Providers are once again challenging the Biden administration on the surprise billing law and the method for decidin...

Rural hospitals that weathered the pandemic are facing a funding cliff, in danger of losing some $600 million in ...