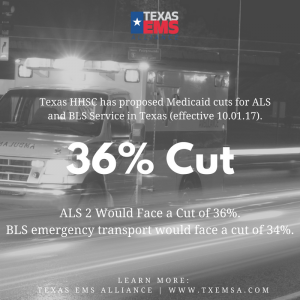 The Texas Health and Human Services Commission (HHSC) proposed new Medicaid rates that could result in significant cuts for ALS and BLS service in Texas.  The rates, which would go into effect on October 1, 2017, are part of HHSC’s biennial review. HHSC held August 8, 2017 public hearing on the issue.

Attend the hearing on August 8 and provide testimony.

Write a letter to HHSC describing how the cuts will harm your EMS agency and the community. Click here for details.

Click here to view TEMSA’s one-pager on the subject: 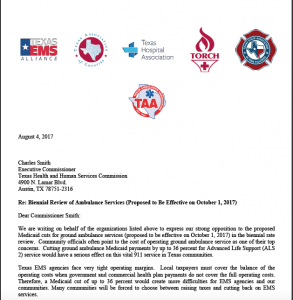 A number of organizations representing hospitals, local communities, and other entities have joined TEMSA to express concern regarding the proposed cuts.  The Texas Association of Counties, Texas Hospital Association, Texas Organization of Rural & Community Hospitals, Texas State Association of Firefighters and Texas Ambulance Association submitted a stakeholder letter to HHSC. 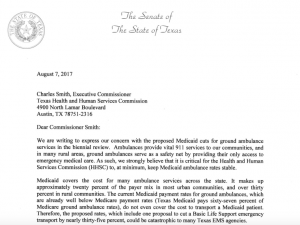 Twenty-two state senators added their name to a similar letter. Click here to view the letter and the list of senators who responded.

It's a busy #EMSWeek in Texas. The draft policy for the ET3 Medicaid program is out - stay tuned for more in today's member e-mail update.

Also, the schedule is full and ready to go for EMS EVOLUTION 2022 this August: